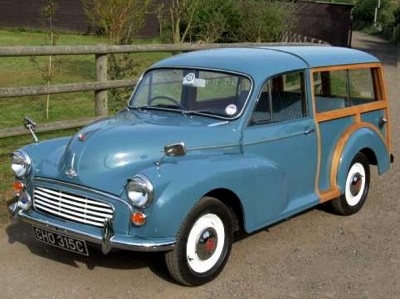 The clever little Morris Minor was a hit from the first time it was shown to the British public. Designed in the mid-Forties by Alec Issigonis, the Minor was introduced at the London Motor Show of 1948 sporting an up-to-the-minute unit constructed body, torsion bar front suspension, rack and pinion steering and a lower center of gravity achieved by using small 5.20 size tires on 14 inch wheels. This revolutionary design was on the cutting edge of small car development and years ahead of the prewar engineering that could be found under most of the European economy cars of the time.

Unfortunately, due to time and financial constraints, this ultra-new package came powered by a tried and true prewar Morris 918 cc flathead four and stump puller gearing instead of the 1000cc air cooled, opposed, flat four that was planned for it. While the old flathead proved adequate for the 35 MPH average speed driven on the two lane secondary roads that could be found in England and most of the empire at the time, the early Series MM Minors found little favor here in the States.

In 1952, Nuffield Motors, the firm that built Morris cars, merged with Austin to form the British Motor Corporation (BMC). The Minor, now called the Series II model, acquired Austin's new 803 cc OHV four. Heavily promoted with lines like "New Power For The Minor" and "0 to 50 mph in 28 seconds", the car became an English favorite and started to sell in the US as an economical "second" or "shopping" car.

1957 brought an even more powerful 948 cc four, a better transmission and a curved undivided windscreen. America was experiencing a recession during the late '50s, and car buyers were starting to re-examine their "bigger-is-better" attitudes. Our first foreign car "boom" was on. Though the top three selling imports were the VW beetle, Renault Dauphine and the Ford Anglia, the little Morris had alot going for it. Still perceived as a small car technology leader, the Minor 1000, as it now was called, inherited a somewhat "sporty" image from its MG and Austin-Healey brethren. The Morris also had the most extensive product line featuring both two and four door sedans, a convertible, a wood framed Traveller station wagon, a pickup and a delivery van. In 1961, the Minor became the first British car in to exceed 1,000,000 built.

The Morris 1000 continued, with only simple trim changes until it was pulled from the American market in 1962 due to lack of sales. Times had changed. The recession was over and our "Big Three" had introduced their own "compact" models. Though not nearly as economical as the imports, these cars provided the combination of a low purchase price and reasonable gas mileage with a larger size and flashy styling. Other than the VW and some sport and luxury models, foreign car sales were on the decline.

By 1967, the American compacts had ballooned into "mid-sized" cars featuring V8 power and most of the toys found on luxury models. Did Mom need a 300 horsepower, 3500 pound sedan to drive to the market and the hairdresser? Foreign economy sedans, now called "sub-compacts", were once again gaining popularity. The appeal of smaller, more agile and economical imports had increased to the point that even the Japanese had entered the market. Not to be left out, BMC re-introduced a now vastly improved Minor 1000. This car, with its new 1098cc motor, bigger brakes, better transmission, and higher rear end gearing provided relaxed freeway cruising and 42 mpg.

Over 1050 '67 Minors made it to these shores before BMC was forced to pull the plug again. This time, the 1968 EPA (smog) and DOT (safety) regulations would require all auto manufactures to re-engineer their products to comply and BMC decided to drop the importation of the Minor and put their efforts into the MG 1100/1300 sedan and the Austin America. The Minor continued in various forms overseas until mid-1971. Over 1.5 million were built by the end of production. In total, 65,000 were imported to the US between !949 and 1967.

The Minor Traveller was introduced in 1954 as a Series II model. The unit construction floor and "cab" section was built at the main Morris plant at Cowley, then shipped to the MG factory at Abingdon to be fitted with the wood and aluminum rear "doghouse" structure. MG was just phasing out the wood frame bodied, TF to make way for the all steel MGA and their fully staffed woodshop was just the ticket for the Traveller woodwork. Always popular, the woodies were built beside the trucks until the end of production in 1971, while passenger car assembly ceased in 1969.

— Morris Minor Traveller History —
Written by Rick Feibusch – Created 2011-12-05 Published 2011-12-06
Contents © Copyrighted and published under the following terms:
Copyright © the author and published by permission or fair use.

Member Comments on Morris Minor Traveller History   ↵
2014-06-09 22:11:51 # 17774
Comment by Raqy Costa
Ray Newell, in a couple of different books on minors, says that travelers were assembled at Abingdon only from 1960-19664 because there was a lull in U.S. orders for MG sports cars. That's probably true as the the MGA was phased out in 1962 and it took a while for the MGB top catch on. Since many people knew the MGB was coming, orders for the MHA dropped off dramatically towards the end of 1961. Originally it was intended that Travelers were only to be assembled at Abindon for two years, but it dragged on. There is no easy way to tell if a traveller was built up at Abingdon.