Importing a Morris Minor from the UK to Australia

The legal and shipping steps involved in bringing a Traveller Down Under.
Written by Andy D – 2012-05-29
How-To Library > Buying a Used Vehicle Section 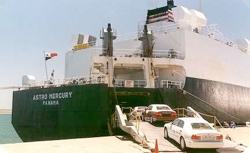 Since importing my Traveller from the UK into Australia in 2003, I have had many inquiries about how I did it and how much it costs. The good news is it cost me probably a lot less than you think, the bad news is the paper trail I chased to make it all happen.

First a disclaimer – this is what I did, to the best of my recollection – if you do this and get hauled over the coals by customs, don't say 'he told me'!

The first thing I had to do was get a 'vehicle import approval' from the Department of Transport and Regional Services (now called DOTARS I believe). This is needed before anything is shipped as it will not be issued retrospectively and the vehicle cannot be registered without it. Someone I used to work with has a near new BMW motorbike in their garage which is a giant paperweight as it hit the docks without one of these – ouch! Cost about $50 as I remember, and records the chassis number and make/model.

Once this was sorted, I had to organise a freight forwarder. I used Henning Harders in Sydney ((02) 9358 5100) and I found them to be very good. To make it cheaper, my dad delivered the car to the docks and I received it here at the docks. I was lucky enough to share a container with Morris Minor World, made the freight part much cheaper. The containers are not quite big enough to park two cars nose-to-tail, but the inventive could probably put two cars and many spares in one with some creative woodwork. The freight was really cheap - $1000 for the car to Sydney. On top of this there are the transfer/delivery orders/paperwork and gate fees, making a total of about another $250.

The devil is in the detail as they say, and this is where the 'hidden costs' come in. A whopping $1500 went on duty/GST and compilation fees (whatever that means). This is not the duty you pay when you register a new car, but rather something to do with the import, but for the life of me I can't remember the details...

Supporting Member to hide this ad & support a small business

When I was informed that the car had arrived, I got a call from customs and quarantine that they had made a preliminary inspection of the car and found that it was dirty – it had been raining on the way to the docks – and I should have been up for a $400 steam cleaning bill. However, the nice man said if I came down to the docks early the next day I could use the fire hose to clean it down – which I did! The actual inspection was brief in the extreme – a few questions about what was in it (no officer, there are no narcotics/guns/dirty camping equipment or magazines) and a rubber stamp and that was it. Cost: $145.

Believe it or not, that was it. So there I was on the dockside with the Morris and told I could go! Hmm, flat battery – large crowd as I started it with the handle! One of the dockers thought it was a wind up car....

I drove it home on the (still current) British plates and didn't see another one on the way.

Total cost so far: $3244 (including all the other paperwork and minor costs. Some of these may have been unnecessary, but there you go). Another bit of GST (why not?) and a new total of $3450.

To register it, I needed a TARE weight at the local weighbridge (about $50 and about 830kg) and to generate the RTA paperwork on the system at the local office. The conversation went something like this:

And so on. Eventually they weakened and so I paid about $100 in duty for my Traveller. How much is one worth anyway?

For those that are interested, the Traveller is fairly common in the UK, in all conditions! The last issue of Minor Matters (the UK MMOC mag, and excellent at that) had 8 for sale, from 150 pounds (yes really) to 5000. A really good runner with sound wood can be had for about three grand (UKP).

There are other considerations for those salivating at the thought of the joys of Morris damp rot ownership; I had owned the car for over 10 years by the time I shipped it. There may be (and probably are) additional fees if you ship over a car which you have just bought, although as they are so old I believe it is not viewed quite as harshly as if it was as a new vehicle.

If you want to pick my brains further, or see some of the paperwork, leave a comment below!

— Importing a Morris Minor from the UK to Australia —
Written by Andy D – Created 2012-05-29 Published 2012-05-29
Contents © Copyrighted and published under the following terms:
Copyright © the author and published by permission or fair use.

Comments on "Importing a Morris Minor from the UK to Australia"

Member Comments on Importing a Morris Minor from the UK to Australia   ↵
Rated 8 out of 10 based on 1 ratings
2014-10-10 10:43:21 # 20875
Comment by Ian State
Rating: 8/10
Hi i read your about the problems you had importing your traveller i hope you still have it after all the hassle you had my goodness doesn't your customs go overboard i have family in Adelaide my sister as lived there since 1962 she keeps telling me to go out there and bring my traveller with us (er) no thanks i wouldn't want to go through what you did its crazy my nephew told me there is a few morris minors running around in Adelaide and well taken care of, now if you ever get the chance to (travel) go to Malta its full of them infact full of every classic British car's and Motorbikes it was an haven for me seeing them we also saw some parked on the road side covered in dust poor old things looked like they wasn't used for years hope to go back next year nice reading your story .
2016-10-24 09:55:38 # 38006
Comment by Cork Marcheschi
I am interested in bringing a Traveler into California from the UK. Can anyone offer me advice on this endeavor?Cork